The potluck prompt compelled Norma to try new techniques. Not thrilled with her first piece of textile art, she even began a second. 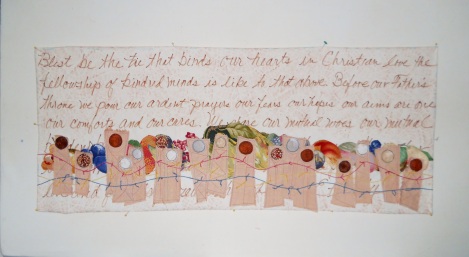 “The first piece is based on hymn we always sang at end of Family Fellowship,” Norma explained. “But the fruit didn’t come off right. The fruit in the center is too big and can’t be fixed. The tie that binds looks like a barbed wire fence, so that’s a design error as well.”

She was trying to decide if the piece could be redeemed, but suspected the whole thing might get tossed. That felt like such a shame, Paul and I jumped in to help her generate ideas. She had already gone in with crayon to make the background more complex. Maybe the ties could be straighter. Maybe she could couch the three tie colors together and form them into a zigzag. With the right adjustments, we could all imagine this as banner in church fellowship hall.

But Norma did not feel bad about not reaching a point of satisfaction with this design. “I was playing with technique,” she said. ” Idid this in four hours, starting from blank fabric. I learned a lot. I like the use of script, which is good, because I need that for a stole that’s due the middle of next month.”

Because she’d been having fun with geometrics for a few months, Norma chose a completely different angle for her second attempt.

“This is a bird’s eye view of the potluck table,” she said. “Now I’m imagining it with a plain background, with the shapes all in neutrals. I may also create a stamp from this design, to use as a repeating pattern.”

The theme of this work might be a “foretaste of the feast to come.” As this sample is only five inches wide by 15 inches long, it has potential as a stole motif.

“This prompt has gotten my into great territory for the month of August,” Norma said. Indeed.

One response to “Potluck | Norma’s Experiments with Technique”