“Pick a random date in history (date, month, year), research what happened that day, and make something inspired by the events.”

That’s the prompt from Noah Scalin for Day 301 of 365 days of making things.

I chose August 8, 1974. Most likely, the month was influenced by my desire for warm weather. I landed in the ’70s because this week my husband and I finally saw American Hustle. And in truth, I chose the 5th. But nothing much happened that day … so I paged forward a few days to the 8th.

On August 8, 1974, Richard Nixon resigned his presidency of the United States. I know my family gathered by the TV to watch that speech, but I was only five years old, so I don’t remember the scene. Quite possibly, I read this momentous speech in college, but it doesn’t stand out in my memory like those of Martin Luther King, John F. Kennedy, Winston Churchill, Abraham Lincoln, and other great orators.

But today, when I read the text of Nixon’s speech, I was fascinated by the messaging. I’d love to hear some of Nixon’s phrases come from the mouths of people who hold office in our nation today. One sentence, in particular, made me long for a political culture more invested in shared interests than personal gains.

“But the interest of the Nation
must always come before
any personal considerations.”

While contemplating the words, I created a very basic info graphic: 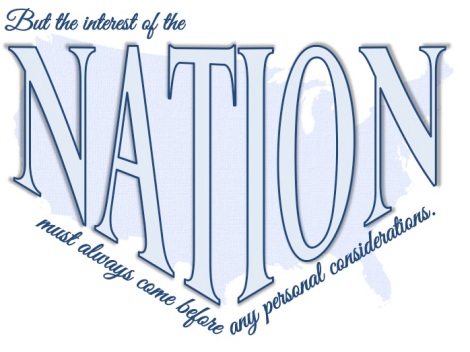 And I’ll be thinking about this for some time. What if this notion were more ingrained in our country’s leadership?