Noah Scalin sent me into an alley today. In my uptight Chicago suburb, this was not a dangerous mission. But I took two teenage boys with me anyway. Because they happened to be in the car. And I like subjecting kids to my creative whims.

The mission was to gather materials from the alley, then make something with whatever I found. Why wait? I chose to do my creating right then and there. In this pristine alley lined with herringbone pavers and ivy, the greatest challenge was finding debris. Oh, it wasn’t spotless; there were a few cigarette butts, a plastic lid from a to-go cup, the head of a broom, a sock. But as alleys go, it was pretty tidy.

To me, the most interesting material appeared in little heaps here and there at the foot of the buildings. Little scraps of wood. Mulch, maybe? Blown into the alley by a street sweeper?

Whatever it is, I scavenged through one pile and formed a word, while the boys looked over my shoulder, probably questioning my sanity. Isaac took the photo, and we were off to Dairy Queen. (That’s how I bribed them to join me.) 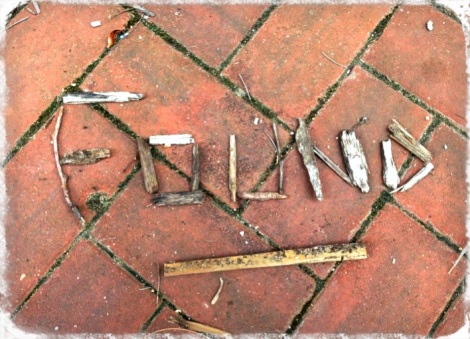